Type your search terms above and press return to see the search results.

The following magazine article was published as the cover story in the Canadian Society of Nutrition Management’s Spring 2014 issue. Find the PDF here.

Mobile dining is fun, but is it safe? 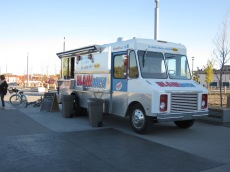 It’s just a restaurant on wheels!

Canadians have been eating hot, fresh food from street vendors for generations, but it’s only in the past three years that purveyors of street meat have been usurped by ostentatious gourmet food trucks – mobile food vendors in vehicles either specially designed for dinner duty or converted from past lives as RVs and other spacious trucks, vans and trailers.

However, just because they roll around cities instead of staying put doesn’t mean they’re different from four-walled restaurants. It certainly doesn’t mean they escape the scrutiny of health organizations.

“For us, it’s really just a restaurant on wheels,” says Rob Colvin, a food safety manager for Toronto Public Health.

The new wave of food trucks has a relatively short history. According to Smithsonian Magazine, the current food truck explosion ignited in 2011 thanks to Los Angeles’ long-lived fleet of taco trucks, and especially to chef Roy Choi and his Kogi Korean BBQ fusion taco truck. Kogi is widely credited for popularizing and perfecting the combination of serving high-quality street food from a truck with no fixed address and for using social media to publicize the truck’s whereabouts.

It’s likely the mere novelty of food trucks in Canada can account for much of the buzz around these restaurants.

Combine that with low start-up costs allowing new chefs to get in front of eaters, creative menus, and the fun that comes with tracking down a good truck on a nice day and you’ve got a recipe for success.

Keep reading this article in PDF

Tell me something Cancel reply